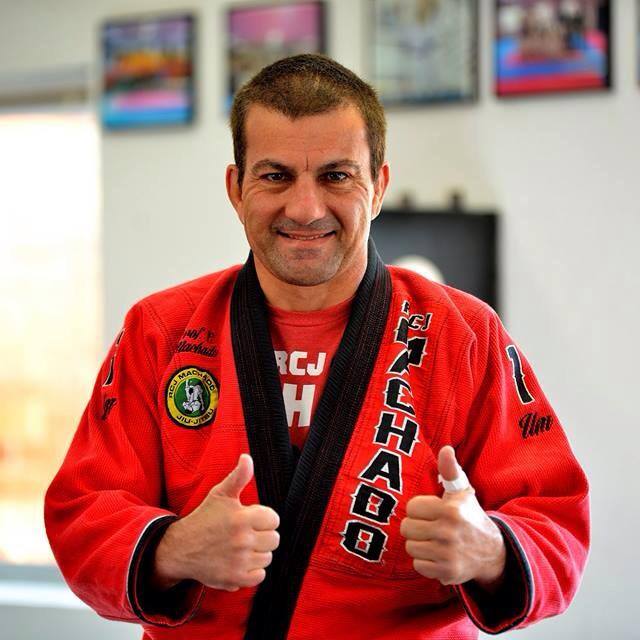 Past Interview with Carlos Machado 2003

Carlos Machado recently sat down with Vandry Brazilian Jiu-Jitsu to offer his history with this gentlemen’s martial art, some insight on the growth of the sport, and his thoughts on women in BJJ. Carlos is a 6th degree black belt (Note: Carlos is now an 8th degree Black belt) , making him the highest ranked instructor in the Southwest US. He is ranked among the top thirty black belts worldwide. His accomplishments in the sport are numerous, but they are not what define Carlos Machado. What are the most common characteristics mentioned about Carlos? The ones I have heard time, and time again, are that he is an unbelievably fantastic person and he is a phenomenal instructor. Here he offers answers to a few questions. Enjoy.

VBJJ: Can you give us your background in BJJ?

CM: I was the first of five brothers (Roger, Rigan, Jean-Jacques and John). I started learning Jiu-Jitsu originally with Carlson Gracie at the age of four. Shortly after I became student of late champion Rolls Gracie. After his passing, my cousin Carlos Gracie Jr. became my main instructor, although at different times I trained with his brother Crolin Gracie. Occasionally, I would train with great champion Rickson Gracie, at his academy in Brazil. My brothers followed the same path, and we became instructors at the Gracie Barra Academy in Brazil, while under our cousin Carlos Gracie Jr. Once we decided to move to the U.S. in 1990, our school was named after our family, Machado Jiu-Jitsu. Our first school was opened in Tarzana, California, and shortly after we opened our second location in Redondo Beach, CA (1992). Today, each brother runs his own academy: Carlos in Dallas, TX; Roger in Pasadena, CA; Rigan in Torrance, CA; Jean Jacques in Tarzana, CA; and John in Los Angeles, CA.

The Machado Network began in 1996, with my first affiliate school, William Vandry BJJ. Today, each brother has decided to run each association separately.

My Network is called “Carlos Machado Jiu-Jitsu Association”, an entity with the objective of raising and legitimizing the standards of Brazilian Jiu-Jitsu in the U.S. Vandry BJJ is the longest running member of my organization. Other members of the association are Solis Martial Arts Academy in the Houston area located in Humble, TX, Machado Miami is in Miami, FL and Julio Gamboa is in Monterrey, Mexico.

VBJJ: Who are your instructor(s)?

CM: In the following order, these are the names of the instructors who assisted me in my training the most. Initially and for a short period I was under Carlson Gracie and then briefly under Rolls Gracie. For the most part of my life, I’ve been under Carlos Gracie Jr. (who I still consider my instructor). Later, after moving to the U.S. my main instructors are my brothers.

CM: I have been an instructor since 1981. Initially, as an assistant to my instructor, Carlos Gracie Jr. and since 1983, as a senior instructor myself. I was in Los Angeles from 1990 through 1995, and moved to Dallas in October of 1995. It has been a little over 6 years so far that I have been teaching in the LoneStarState.

VBJJ: What kind of growth and changes have you seen happen to the world of BJJ, both nationwide and in Texas?

CM: Brazilian Jiu-Jitsu has become more and more popular worldwide. Now, you can go to the four corners of the world, and find some place to practice. In the U.S., the majority of the schools are located on the West Coast, followed by the East Coast and some areas in the middle of the country. Texas has had its share of growth, especially in Dallas and Houston. Although there has been incredible growth in the sport, I believe there is still a lot more to be accomplished. Most of the students who initially started in BJJ were martial artists themselves, often following the Ultimate Fighting Championships (UFC) and other events that showcased BJJ. Now, we can slowly see an appeal to the general public, a vast market yet to be conquered.

In the early days, as I started promoting BJJ tournaments locally, it would be considered a good crowd to have 100 competitors. Now, each event brings a larger and larger crowd. We had nearly 300 competitors at our last event on February 1st. It grows every time and I believe it’s because Brazilian Jiu-Jitsu is a clean and exciting sport.

VBJJ: What are your thoughts on women in the sport?

CM: It is a healthy trend to have women involved in martial arts, especially in Brazilian Jiu-Jitsu. Since BJJ is a close combat and grappling oriented art, females can be uncomfortable with the positions on the ground. Since BJJ has become more popular, and its’ benefits are apparent to the female public, it started a great demand. I know in the past in Brazil women were not encouraged to practice BJJ because of the exclusive point of view that BJJ was predominantly a male sport. Once people realized that this was not necessarily the case, and for self-defense reasons, women could benefit tremendously from BJJ, the barriers were gradually broken. Today, more and more women join BJJ schools. It is a healthy, safe, exciting and effective self-defense method for men and women alike.

VBJJ: What kind of impact do you see women making on BJJ?

CM: I believe the involvement of female students in BJJ will bring to light the importance of women learning martial arts. The crucial role BJJ techniques play on the ground enable women to fair well against stronger aggressors, avoiding rape and minimizing assault attempts. Other than the self-defense advantages, women by their nature are more flexible and less muscular when compared to men, therefore, they can actually learn faster and become more technical than a male counterpart.

Women in BJJ send a clear message that this is not a sport for male students only. They will take the art to a new level, allowing other women to enjoy the benefits of a healthy and effective martial art.

VBJJ: What adjustments, progress, or changes do you believe are necessary as more women participate in BJJ?

CM: Students, whether male or female, will always need enough feedback if they plan to compete. Competition does not involve only the mat time, but strategy, drills to enhance key positions, stamina, good nutrition, and the right mindset. It has to be a comprehensive approach.

As the attendance in competition increases, women will slowly climb the ladder towards more and more recognition. There are more and more women competing everywhere. One recommendation I would make is there should be a consensus about their weight division. In my opinion, women should have a different weight division than the one used for male competitors. I think there should be a smaller range between the weight divisions. Maybe I’m mistaken, but I believe it would add more fairness in their divisions.

CM: I cannot predict10 years from now, but I can surely see within 5 years every school of BJJ with a great number of female students. I can foresee women’s divisions getting huge at every tournament. I can see the sport appealing to women from high school, college, and professionals. The door is open, and time will prove how great of an impact women will have on the sport, and also, how much impact BJJ will have on women’s lives. It is a new world that should always be available to them.

VBJJ: What advice would you give women, or any potential student, interested in BJJ?

CM: Research for a reputable location. Visit a school and observe a class. Check the instructor’s background and how the environment feels at the academy you visit. Once started, do not rush, take your time and enjoy the ride. Martial arts are not a quick fix, but a lifetime journey.

Remember that BJJ is not about ego, but personal growth. The ultimate goal is not to become the greatest fighter, but a happier and more balanced person. If on top of that you can add all the medals and trophies, great! If not, as long as you improve a little bit everyday, that is all that counts.

VBJJ: In your opinion, does the nature of training (mat time) need to be different for women?

CM: Women can learn faster and better, since they are less muscular and more flexible than most men. That very difference makes them concentrate on techniques that require less effort, and their range of motion is better due to their more flexible nature. A balance between drills and moderate sparring will take them further than going too hard all the time. Other than that, I think everything else is the same as with men.

CM: Yes. As the current syllabus of MachadoDallasAcademy evolves, a new strategy will result towards recruiting more female students, and providing them with all the tools for comprehensive learning and progress. It is just a matter of time. I dream to make many female Black Belts myself.

VBJJ: Would you share your parting thoughts on women in the sport?

CM: Women are a welcome and beneficial addition to BJJ that will help the market of our sport to other women still unaware of the benefits they can get from it. I believe it is already a positive change to have more women involved, not just for the growth of BJJ, but also for the benefits it will bring to all those female students who spend time on the mat refining their skills, and enjoying a healthier lifestyle.

VBJJ: On behalf of Vandry Brazilian Jiu-Jitsu I would like to extend our appreciation to Carlos Machado for his time and his leadership. Carlos Machado teaches BJJ in Dallas, Texas and has a demand for his seminars year round. For class times, privates, or seminar information he can be reached at 972-934-1316. His website is www.carlosmachado.net 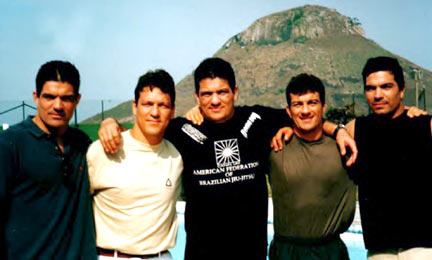 Carlos (second from right) with his brothers (Jean-Jacques, Roger, Rigan, Carlos and John)