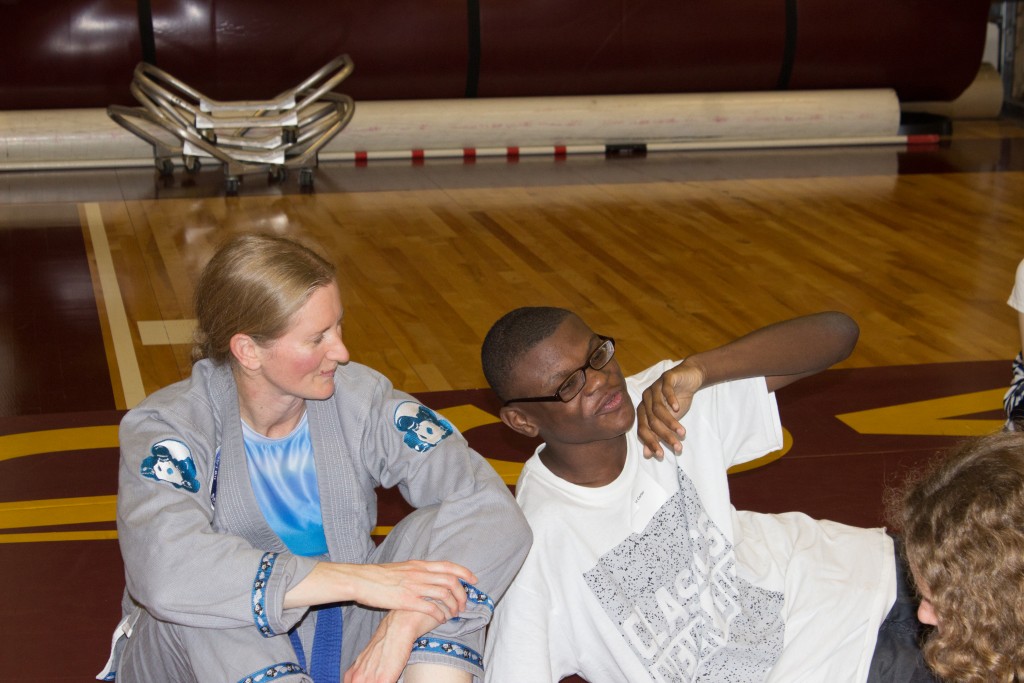 What is Jiu-jitsu for?  There are a number of reasons, but let’s go through a few:

Martial arts first and primary goal is to learn how to defend yourself.  It is not for competition, or even fitness, although those are goals on a secondary level.  You have to learn how to deal with stronger opponents, or those that can possibly bully or pick on children.  Most parents bring children for something of an outlet.  Usually this can be a parent that wants his or her child to be less introverted.  I have worked with children with Autism, Asperger syndrome (AS), also known as Asperger’s, is a developmental disorder characterized by significant difficulties in social interaction and nonverbal communication, along with restricted and repetitive patterns of behavior and interests.1  As a milder autism spectrum disorder (ASD), it differs from other ASDs by relatively normal language and intelligence.2

I have been very successful with those children, and working around those conditions.  My top children’s coach has worked with autistic children as well.  I have also worked with legally blind children at my academy, and one did well in a competition of BJJ years ago.  My wife and I work with the legally blind year around, and we do projects for the Texas School of the Blind, and have worked with the Blind Veterans Association.3

For average students, most also want some type of self defense course.  Despite what some schools promote training 7 days a week, or competition is their main promotion, they miss the point.  Most students do not compete unless it is a small club or group.  Some may compete once in a while, but the goal is not to force students to compete as a primary goal of their learning.  For my students that do compete, if they are children I emphasize their school grades first, and although rare, school instructor’s should pay attention to a parent’s goal with their child.

Children’s parents are usually attentive to watch classes, or attend ranking ceremonies.  They are very supportive to their children.  I have experienced in the past parents looking for schools to enroll their child that can be quite the opposite.

Here are two experiences I had that show different types of parents.  One was a Father who moved in from the Dallas area, and his child was about 12.  I change into my gi to teach the kid’s class.  I come out of my changing room and there is a child I do not know in a gi sitting on my mat.  I asked him could I help him.  He shrugged his shoulders.  I walked into the lobby and it was a parent there.  I asked him could I help him, and he told me he wanted his son to try my class.  He said his son had trained a year, and was the most talented child in the world.  Usually parents call or make appointments through email when bringing a child or if an adult plans to attend or try a class.

I was right about to start, so I explained to him waivers for a class, brief rules.  He had no problem, and kept expressing how great his child was.

When we did the class, I had three children that trained with him.  All of them were very nice, didn’t go hard on him, but tapped him in a gentle way.  They were all his age as well.

At the end of the class, the child told me how impressed he was by the students, especially the two girls.  When I walked into the lobby, I began to speak to the Dad.  He then seemed eager to leave.  He stated that he wanted to talk to his son and get back to me.  I asked his son in front of him how did he like my BJJ class?  His son replied: “Wow, I have never seen this before, and those girls I don’t know what chokes they did..”

I then looked at the Dad, and stated: “Well, I think you heard it yourself, it looks like he has a desire to learn.”

The Dad replied by telling me he wants his son to be a world champion.  He then told me he has two other sons.  What he told me next summarized his entire goals in BJJ for his son.  He replied, and this is pretty much verbatim:

He then said he needed to leave, grabbed his son and left.

This is an issue with those types of parents.  Those children may in fact never learn, or develop their self defense skills because of the living vicariously through the child parent.

I have on the other hand some great parents.  One of our students and kickboxing students has two children.  He and his wife like many other parents in my kids class are very supportive, and are there at promotions, or even in tournaments.  I note when his children compete, they are very talented, but there is no pressure from him or like the parent above.  Children have to develop and grow, as I have some students in their twenties that used to be in my kids class.

Some adults may have this same persona.  I have discussed many times other school’s students asking to attend my classes, and asking for open mat days, but I refer them back to their instructor.  I think any type of solicitation may be of different factors.  If a student no longer trains at a school, then I am glad to speak with him, but never, and never should any BJJ instructor take a student from another school simply to make money or care less about his respect for other schools.

Women develop self defense and that is their primary goal at first.  We had one woman who was very shy and polite, that attended kickboxing classes at our school.  She contacted me months ago, and was frightened and excited that she defended herself against a male adult.  It was remote control for her, and a good snap kick to the person’s chest backed them off.  Good for her!

I have had overweight children, and adults start at my school.  My wife and I research and lecture on nutrition.  We believe in maintaining health with students.  We teach at our Got pain? clinics each year regarding nutrition, inflammation, diet, and rest.  If you have blood pressure issues, or arthritis, it can be very difficult to train with inflammation or pain.  Those you can overcome with proper training, warmups and of course learning nutrition.  I have many articles you can refer to such as some on joints and pain.4

I have had some overweight students in the 300+ range and one in the 440lb area. Children have more diabetes, and obesity and the parents do too.  I have worked with two good students who have literally changed their health.  Here is one I changed his diet, correct nutrition, and you can clearly see a huge difference in less than six months: 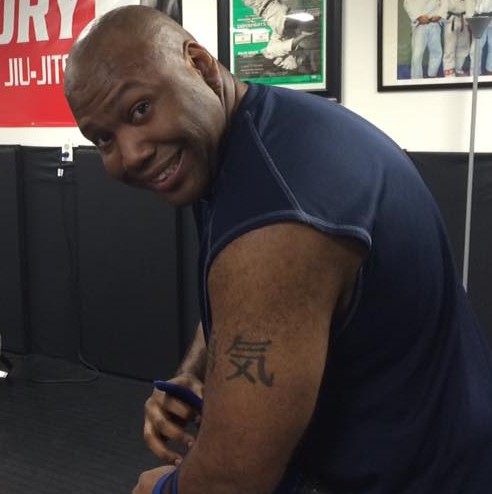 Here is a second student, about 440lbs. and down to around 300 in less than six months: 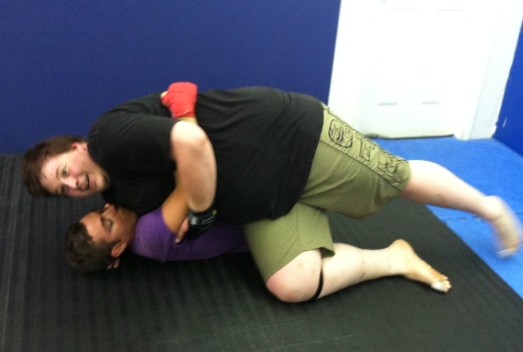 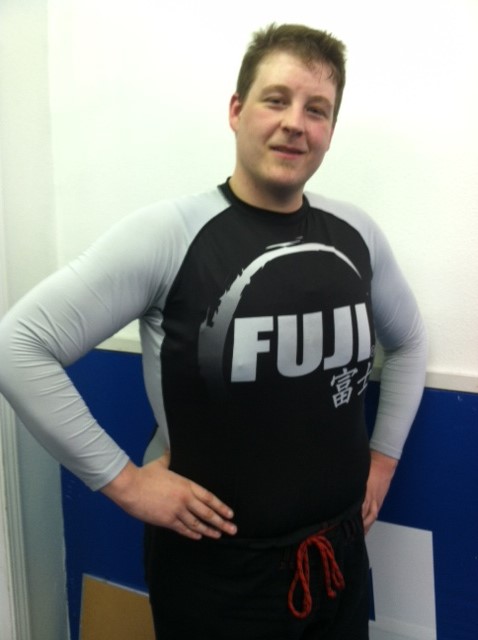 Obesity and blood pressure relate with diabetes, heart disease and other conditions.  For more information on health articles, you can read about disk disease, diabetes and more.5

Nutrition is not an option.  When we have essential vitamins and minerals, remember what essential means.  You don’t have a choice.  Both of the students above had arthritis, and one had a knee that kept popping out of joint.  He doesn’t have those problems anymore, but a key component whether just for self defense, competition or fitness there is another  primary point.  If you don’t add nutrition, you will degenerate more.  A primary diet of correct mineral and vitamins along with enzymes and detoxification are paramount in today’s plague of illness, heart disease, diabetes, cancer and more.  As a student, you have to remember calcium and magnesium flex and relax muscles, along with keeping the neurological system maintained.  If minerals are depleted, you can develop other forms of osteoarthritis, osteoporosis and others.  Read other health articles for more information referencing the Pubmed medical journals.4

Keep training, and if you are a potential student looking for self defense, fitness, health or related areas, please give us a call or stop by the academy.  512-585-1289.