-June 11th, 2012 The Texas School of the Blind invited BJJ Black belt Professor William Vandry to introduce Jiu-jitsu to Blind students. Kristine Seljenes, Adapted PE Teacher at TSBVI formed the summer Camp (called Camp Challenge) at the Texas School for the Blind and Visually Impaired. Seljenes’ goal is to develop activities for blind students. Seljenes arranged and hosted 3rd degree Black belt Professor William Vandry to tackle this task of stimulating blind students, and to relate with an athlete and to have a positive role model they can appeal to. Vandry is one of Texas’ top five highest ranked BJJ Black belts, and former Team USA competitor.

The summer camp offered a 2-hour self-defense class for them on
Tuesday, June 11th from 6pm-8pm.

A large group of Vandry’s students accompanied him, and paired up with blind students and employees of the school of the Blind. Vandry stated:

“Everyone needed to attend, staff and blind students. This seminar was not just for Blind students, this seminar was meant to show four things, A person with sight is equal on the ground with a blind person, second, the drills and training overcome emotional barriers such as low self esteem, shyness and low self confidence. Third, learning to wrestle in a safe, fun environment is possible whether you are legally blind or not. Fourth and last, I have taught many clinics with the blind, and at Criss Cole over the years, and if there is one goal I intend to accomplish with blind students, the message is to not allow you to be immersed in self-pity, or hopelessness. This type of motivation is not just for blind people. We have so many people in the USA that have ups and downs that need this lesson instilled as well. I think I succeeded when my wife and I along with my awesome students who volunteered to assist got to train with staffers and blind students. What is so awesome is that after the training, everyone forgot who was blind and who was not. We all have the same sight training Jiu-jitsu.”

Vandry began the seminar by stretching, explaining leverage, techniques and overcoming size and strength. The motivational point was also the point of transferring Jiu-jitsu leverage into everyday life of overcoming obstacles, especially handicapped students from The School of the Blind. 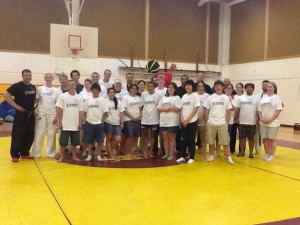 Vandry reflected on blindness and visually impaired and overcoming:

“I do understand how to overcome visual setbacks. I’ve been there, I am aware of many others, and the most crippling handicap in the world is not the physical handicaps in the word such as blindness, it is the handicap of mental confinement to your capabilities. I have had past students who have no handicaps that chose other ways that did not work for them in the end and many more that have overcome troubles in life by not confining themselves to limitations in life. Blind people just need an opportunity to understand they have so many talents and capabilities. Helen Keller we all know about. In the 70’s the popular TV show Kung fu had a blind Master teaching David Carradine. Samson from the bible was also blind but had incredible strength. Franklin Delano Roosevelt was the 32nd President of the United States of America. Roosevelt was visually impaired. Marla Runyan is a marathon runner who is legally blind. She is the three-time national champion in the women’s 5.000 meter run. Runyan was the first legally blind athlete to compete in the Olympics Games. She placed eighth in the 1,500-meter in the 2000 Sydney Olympics making it the highest finish by an American woman in that event. In 2002 she finished as the top American at the 2002 New York City Marathon to post the second-fastest debut time ever by an American woman. I think I may be the only legally blind BJJ Black belt to compete on a world leve, but who knows.I did an interview for a newspaper in 2003. I made a statement that I have never felt sorry for myself.”

The seminar was encouraging, and every student and Staff attendee participated, and enjoyed the positive seminar. The students were asking Vandry when he and his assistants were coming back. 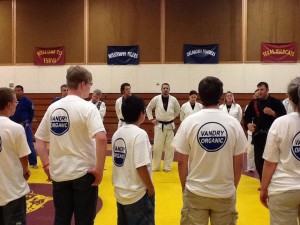 “I really would love to see (no pun intended) all blind people and visually impaired get a type of education, a type of work or career, and to progress forward. They also need to know they are not alone, and not abandoned. My students were priceless in taking the time to volunteer, take off work early, and to sit, talk and let these blind and visually impaired students know that they are people, and we do not involve pity or sympathy. This is what martial arts is about. My students are worth their weight in gold. All of the blind students and staff got to train with us, and they all really liked wrestling with us. What they enjoyed even more was one of my strong points on teaching. I enjoy motivating a student to want and desire to learn what I am teaching, and then ask the question: “How do you get out of that move?”

That stimulus is what promotes interest in Jiu-jitsu students, blind or not. I also am planning to have my first Association Jiu-jitsu tournament this year, and I would love to have a blind division. I think this is a potential sport that every school of the blind in the USA can have as an extra curricular activity, a future PE class, and of course ability for us to develop competition for a blind division that gives a legitimate, athletic sport like wresting for the blind. I could see a global tournament for blind students worldwide. I competed in three world championships legally blind, and of all things, I am so grateful to Godthat I was able to test myself. I hope this promotes more desire and organization in the future.” Vandry said. 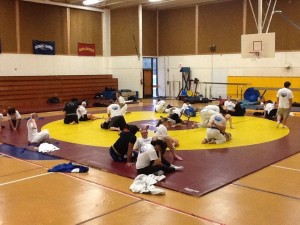 TSBVI staff and students training with Professor Vandry and assistants 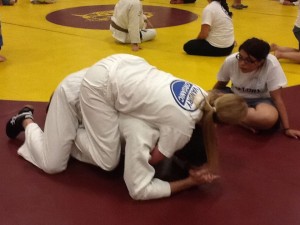 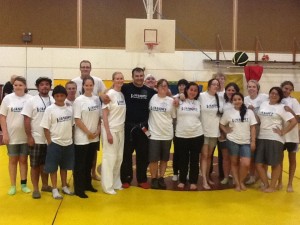 Chandra and William Vandry with TSBVI staff and students

4 thoughts on “Professor William Vandry teaches Blind and Visually impaired students at Texas School of the Blind self defense, confidence and overcoming”