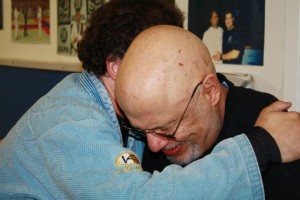 (Here at Vandry BJJ, we welcome a new article by Master Carlos Machado, multiple world champion, pioneer of BJJ in Texas, and one of the top technical Black belts on the planet. Enjoy the article!)

As a beginner in any art or activity, a degree of infatuation is often present as the new comer discovers the ever growing horizon of opportunities and experiences which unfold before them.
Jiu-Jitsu is not an exception to that phenomenon, adding to it the intriguing aspect of its chesslike nature; it is neither a martial art or sport activity alone, but a combination of principles of physical, mental and spiritual nature that equally intrigues and fascinates.
As students become regular faces on the mat, during the hours of business in a school, there is the guidance of a caring instructor; the challenges of making unfamiliar moves part of a game; the camaraderie of an environment that fosters the identity of a group; that operates in communion, where cooperation matters more than competition; where growth of the group is more relevant than individual prowess.
The more gifted often gives counsel to those still climbing the ladder of understanding the art; the less equipped humbly accepts he does not know, and is comforted by the fact others will grab him and take him where he wants and needs to be; as his potential unfolds under the premise that without assistance, nobody can become a champion; that in order to excel, there will never be an accomplishment unless it is shared by all those involved.
The trimming of the ego is a constant clash of two cultural worlds, the overstimulated preconception that pervades our society, that winning is all that matters, at all costs, without consequences; and the wonder of realizing there is more to gain by learning regardless of results.
A champion is not the winner of all matches and holder of all trophies. Those who appear on the podium represent a small fraction of the multitude of talent and dedication that often goes unnoticed before the eyes of the public, yet never missed by the coaches and classmates who continuously follow every step of every member of their community, with or without the limelight.
The real conquest in the realm of achievement, the real measure of someone’s progress is the day to day ordeals they face, and the conduct they carry on and off the mat as they deal with them.
As I was teaching a seminar at the academy of my fond friend and disciple William Vandry, I could not help but notice the faces of those who were not on their uniforms during the course of the event. They were on the sidelines, some sitting with a notepad at hand, others holding a walker while locking their sight on every action on the mat.
Once I inquired over their reasons for being there, and yet not being on the mat, I found out more about the reasons they have not to be there, and yet show their faces.
What lesson that brings upon is that they are part of a community that supports them, in both good or bad times, whether the tide is for or against them. They did not bring their gis; they had every reason to excuse themselves due to something challenging enough in their personal lives, of a physical, emotional, or financial nature.
Yet, their faces were still lit, their demeanor never changed. All I could read was a small trait of frustration, when teary eyes more than gave me an answer in an unspoken way: One could not physically move on the ground, since the stitches and scar tissue on his back could only be mitigated by the crutch he was holding then. He was not sorry for himself, he was sorry for not being on the mat.
That degree of attitude, of commitment, is very comforting to me. I have been in the game long enough to occasionally lose some momentum. Yet, those faces on the sideline, those individuals who refuse to allow any reasonable cause to affect their ability to be there becomes a reason for me as well.
In the end I will share the best I got with everyone, but you out there, looking at me with teary eyes because you cannot wear your gi at that moment, don’t you worry. We will have many more moments to come, and you will be a major reason we, instructors will still keep our fire and give it all; no matter what, no matter when!

Yours in the Martial Arts,

(Editor’s note) P.S. Special thanks to Ed, John P, Stan, Noah and Quinn for always supporting our classes, community and events despite physical setbacks in life.

7 thoughts on “A brother’s tip! By Carlos Machado September Article”