I wrote this article for a variety of reasons.  I have worked with the disabled for many years.  I understand overcoming disabilities myself.  I have taught Martial arts to adults and children with disabilities such as:

And of course many others such as cardiovascular diseases, osteoporosis, etc., but I wanted to focus more on disabilities here due to birth defects or trauma.

I have an autistic child in my children’s Jiu-jitsu class (Actually I have two).  His father spoke to me about him and his autism, and we both discussed his improvement from day one.  He was very antisocial at first, which is very common with children with autism and other types such as Autism Spectrum Disorder.   According to the American Psychiatric Association’s Diagnostic and Statistical Manual (5thedition), “Autism Spectrum Disorders” are characterized by “impairments in communication and social interaction,” by deficits in “social-emotional reciprocity,” and by “restricted, repetitive patterns of behavior, interests, or activities.”  The DSM notes, “Only a minority of individuals with autism spectrum disorder live and work independently in adulthood.”

I believe many disabilities can be overcome, and all can be overcome in different ways.  My student Kaleb’s mother posted on facebook about disabled children that get rejected or mocked:

“It would be great to teach our children to be kind and to accept all their classmates.  Kids with special needs want what every kid wants: to be accepted!  And they suffer greatly when they are rejected or mocked.”

My student Kaleb did a video about Autism, and he made a point I believe was referring to respecting people, although these were his words:

“Now you know about autism, so be nice and care show care for people with autism.”

I see this all the time.  I have worked with the legally blind, and I sit and talk to each of them and their challenges.  I have had blind children at my clinics break down and cry about bullying or mocked by so many in schools, or neighborhoods.  This is appalling to me.  And I label it right there with cowardice, and moreso the person’s own low self esteem from what they endured from their own childhood or their own parents.

I have always taken the time to talk to any of my students that needed to talk to someone.  Children endure bullying and mockery, but many adults do at work, or community areas as well.  Although only 10 U.S. studies have been conducted on the connection between bullying and developmental disabilities, all of these studies found that children with disabilities were two to three times more likely to be bullied than their non-disabled peers.1

I remember my first class I taught to the legally blind.  I had a 20 year old woman who was totally blind from birth.  She disrupted every moment of the adult self defense class for the blind.  I reprimanded her, and it was very embarassing for her.  Since I was invited to this non profit for the blind, I didn’t charge a cent and paid for my own transportation there, this was on my time and dime.  She ended up being the best student at the class.  Why?  For one, that was obviously the first time someone treated her like an adult and not a handicapped person.  I remember her hugging me after.  Disabilities are challenges, but sometimes there are people who have disabilities you cannot cure.

There is a 1968 Braille Monitor for the legally blind that discussed discrimination and hostility:

“From the beginnings of recorded history the blind have been the victims of unreasonable and detrimental classification.  Today these discriminations are being recognized for what they are, and the blind and their friends are insisting with growing success upon justice and equal treatment.  No matter how moderately it may be done this resistance to discrimination will inevitably bring a certain amount of hostility.”2

I hate bullies.  I despise them so much.  Children are not the source of bullies.  Bullies learn from bullying parents or relatives.  Here are instances of bullying disabled statistics:

Self defense with women

I have also worked with women, and I have had women students who have been molested, raped, assaulted, and I remember having a special women’s class for them.  All of them ended up training with men in the regular classes, which was my graduating goal for all of them.  It took me three years, but I did it.  I still teach women’s self defense clinics during the year:

I work with the legally blind, and my goal is to graduate them to overcoming bullies, society, financial dependency and eventually becoming an independent person.

Photo: My wife Chandra and teaching blind students at TSBVI

My wife and I also work with Military Veterans, PTSD, disabled and blind.  If any of them just need to talk, we are always there if they need us.  Same for the disabled.  There are worse handicaps.  I know there are people that mock, attack, belittle, disrespect and many other low self esteem expressions via actions by people. 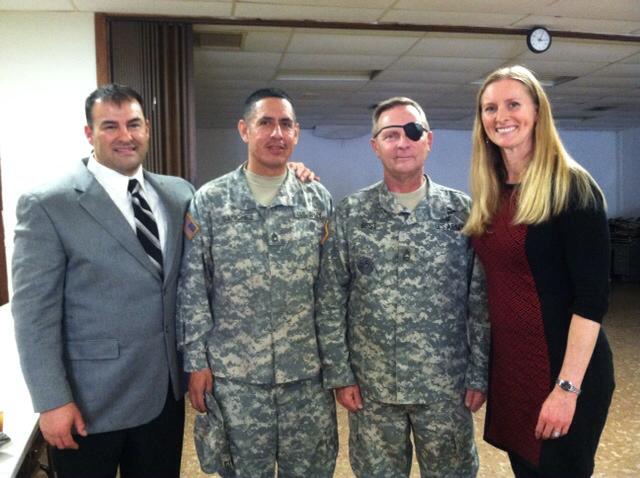 In Martial arts schools, there are good students and bad ones.  The bad ones you try to work with, but eventually you will either excuse them or they usually they are not the alpha male and this napoleon complex is usually the destiny of their life.  I remember a past student of mine that I expelled from my school years ago.  I was told that this person made a statement about handicapped people by stating if  someone was retarded, they’re still retarded.  I think a person like that has more disabilities than a handicapped diagnosis.  Or those that bully the handicapped, such as schools, and work environments.  I have a friend who used to be a programmer at Dell, and he started losing his sight years ago due to glaucoma.  When he walked by with his cane, he used to tell me rude fellow employees came up to him and would ask: “Are you blind, or not blind?”  This was a man in his 40’s.  Most disabled children endure way worse, but like I said, the real disability is the ignorant of those who mock them.  If you have an autistic child, or disabled child, or you are a disabled adult, contact me.  You can find me on facebook.   https://www.facebook.com/william.vandry

I would like you to come by my academy and see disabilities do not matter, I know personally you can develop potential over disabilities.

1. Disabilities: Insights from Across Fields and Around the World; Marshall, Kendall, Banks & Gover (Eds.), 2009 )